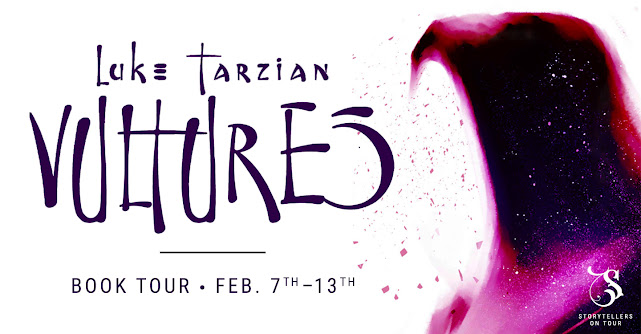 Out of This World SFF Reviews is delighted to be just one of the many blogs participating in the Storytellers On Tour Book Tour featuring author Luke Tarzian and his first book in the Shadow Twins series, VULTURES!  Today is the second day of the tour and I am very excited to be bringing you a synopsis of the novel as well as my official review and some additional links to connect with Luke and his outstanding books.
But first I'd just like to mention that Storytellers is currently running an incredible giveaway in conjunction with this tour.  You could win a paperback copy of VULTURES!  (US Only) 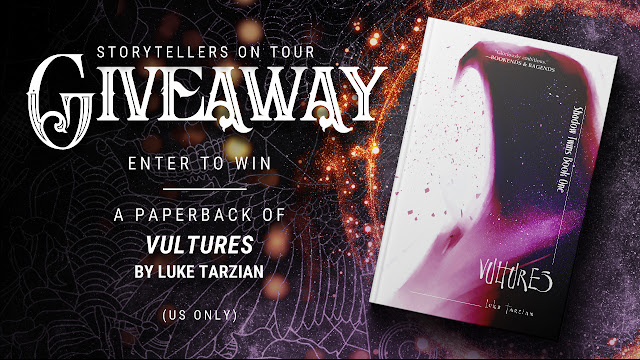 To enter, just click this link.  Two winners will be chosen at random and the giveaway ends this Sunday, February 14th at 11:59pm, so get those entries in now!

And now, here is a brief description of Luke Tarzian's dark fantasy novel VULTURES followed by my review: 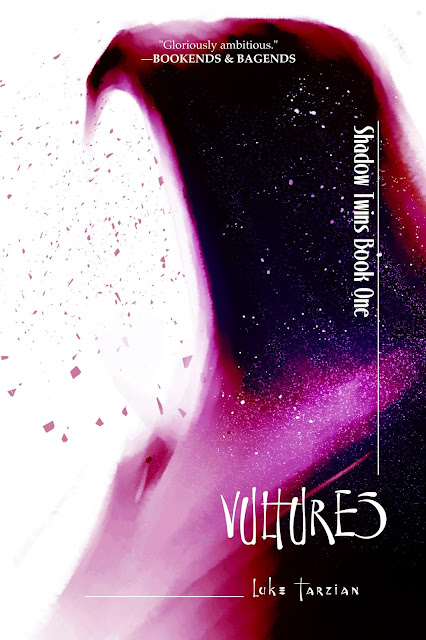 Synopsis
An enemy slain is not a conflict won...
After decades of war the demon Te Mirkvahil is dead.  but its progeny endure, spilling from the Heart of Mirkur, sowing death across the land of Ariath.  If the people are to finally know peace, the Heart must be destroyed.  Theailys An believes he can do just that with The Keepers' Wrath, an infamous power focus wrought in Ariath's yesteryears - but first the weapon must be reforged.
War spares no one...
Serece never intended to get involved in Ariath's war.  But history and demons have a way of pulling strings.  When she learns Theailys An, a man whom she abhors, bears striking similarity to the first creator of The Keepers' Wrath, Serece departs her mountain world for Ariath to ascertain the truth.
From patience, hope...
For millennia Behtreal has walked the world alone.  Rewritinh history to resurrect his people is easier said than done.  But Ariath holds the key - soon The Keepers' Wrath will be remade.
Truth from madness...
As paths converge and a shadow falls across Ariath, one thing becomes increasingly and horrifyingly clear - these events have played out many times before.
Review
VULTURES is told through three separate points of view.  The first is Theailys An, a man whose major goal in life is to once and for all eradicate the demon hordes who continually pour out from a place called the Heart of Mirkur.  These creatures should have been all but destroyed following the great battle that supposedly killed the evil demon lord Te Mirkvahil and his minions. Yet they persist infecting the land around and leaving corpses in their wake.  Theailys believes his only shot is to reforge a weapon of legend that will end the menace and save the people of Ariath.

The second POV character is Serece, an unwilling participant in Ariath's troubles but at the same time thrown into these events due to a premonition that she feels regarding Theailys and his true identity.  She finds herself both repulsed and drawn to this man in some inexplicable way and simply can't find a way to let things go without first finding out the deeper ramifications and meaning behind what Theailys is ultimately up to.

The last POV is the enigmatic Behtreal, committed to walk this world in solitude forever with the hope of bringing his people back to their former glory.  His means of doing so may bring him, like the other main characters in this story, to the brink of madness.  And as we realize that their storylines will at some point inevitably converge, we are also left knowing that something otherworldy and catastrophic may be at hand that could change the history of this world forever.

As I turned the final page of VULTURES by Luke Tarzian, I felt utterly exhausted for a couple of different reasons.  The first was an unbelievably powerful and amazing ending, but also the entire reading journey that it took to get me to that point.  This isn't a book that you can just skim through and get the gist of.  It takes your full time and attention with every page and chapter to appreciate that final payoff.  Tarzian asks you to put in a little work for your enjoyment.  Frankly these are the types of books that are the most rewarding to me as a reader.

Expounding on that, this isn't so much a fantasy book as it is a multi-level reading experience. The alternating timelines are a fantastic vehicle which convey the crucial events that are what make up this incredible dark fantasy tale.  Luke's writing is beautifully evocative and part of what also makes this such a strong story as a whole is his ability to paint wondrous pictures with words.  Often times these pictures are stark and ominous but they are described so vividly and in such great detail that you savor every bit of it and then want more.

Lastly I have to commend Luke Tarzian on his magical world-building.  I'm at a loss to try and figure out how he came up with this astonishing setting in his head.  It reminded me a little of Peter Newman's Vagrant series but with a great deal more texture and complexity.  I was stunned by the beauty of VULTURES and recommend it to anyone who is looking for a dark fantasy book that challenges you at every turn but also really entertains you at the same time.  It's also a book that you want to reread immediately after finishing it to see if you missed anything the first time around.

I am eagerly anticipating the future installments in Luke Tarzian's Shadow Twins series.  If they are anything close to VULTURES, I know that I'm going to be in for one heck of a ride.  Pick this one up if you have the chance, I guarantee that you won't regret it.  An engaging and thought-provoking read to say the least.
Overall Rating:

You can purchase a copy of VULTURES on Amazon by clicking HERE.
About the author 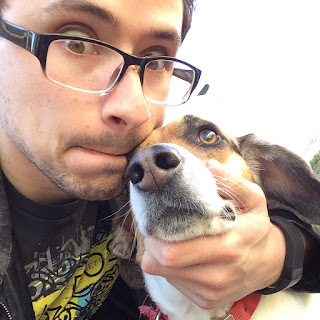 Luke Tarzian was born in Bucharest, Romania until his parents made the extremely poor choice of adopting him less than six months into his life.  As such, he's resided primarily in the United States and currently lives in California with his wife and their infant daughters.  Fascinated by psychology and the work of Edgar Allan Poe, and inspired by his own anxieties, his character-driven fiction functions as a meditation on emotion, most commonly grief.  His debut novel, Vultures, introduced a surreal, demon-ridden world where dreams are sometimes more than dreams and magic, memories, and misery are heavily entwined.  Vultures is the first book in the Shadow Twins trilogy.  You can connect with Luke via his Website, Twitter, Facebook, Instagram, and Goodreads.
And that concludes my stop on VULTURES book tour!  Hope you enjoyed it.  I would like to extend a special thank you to Storytellers On Tour and author Luke Tarzian for the opportunity to participate.  There are many more awesome stops on this tour, so if you would like to check those out, below is the official schedule. 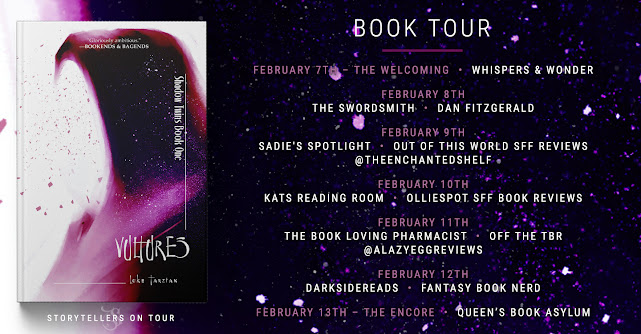 As always, thank you for stopping by and supporting the blog.  Every visit and page view is appreciated more than you know.  Stay safe and healthy and Happy Reading!
-Nick
Book Tours Dark Fantasy Luke Tarzian Self-Published Storytellers On Tour Vultures