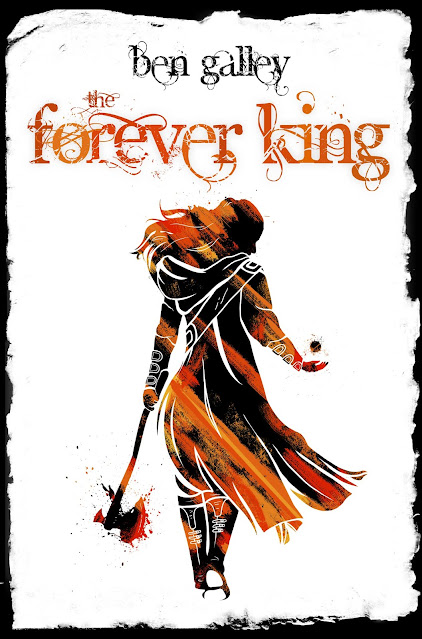 (Title: The Forever King / Author: Ben Galley / Publisher: Self-Published / Publication Date: December 1, 2020 / Pages: 604)
Book Blurb
Mithrid Fenn wants nothing to do with magick.  Magick is a curse word, banned by the vast Arka Empire and punishable by death.  It's purging has finally brought peace to war-torn Emaneska.  Only a stubborn rebellion, led by the warlord Outlaw King, raids and pillages the empire's northern fringes.
To cliff-brat Mithrid, this is an age of tranquility and childhood games.  That is until an illegal spellbook washes up on her shores, and she finds herself thrust into a war she never knew existed.
Now hunted by daemons and mages, she is dragged inexorably north to Scalussen and its rebels fighting doggedly to preserve a memory of freedom.  Mithrid holds no such ideals.  She fights for revenge and nothing nobler.  If spilling blood means helping the Outlaw King, then so be it.  Even if it means all-out war.
Review
Ben Galley writes some of my favorite fantasy books that always seem to turn out incredibly fun, epic, with loads of cool magic and ideas.  His books are eminently readable, so much so that no matter how high the page count, it feels like I have spent no time at all ripping through them.  So I'm not surprised that my experience with his latest epic fantasy release, THE FOREVER KING, was even more of the same brilliant storytelling that I have come to expect.
The story revisits Ben's Emaneska series some years after the events that transpired at the end of the final book.  Prior knowledge of that series is helpful, but by no means a deal-breaker as this is a brand new series and Ben does a great job of setting the table of where everything is in relation to the circumstances leading up to the beginning of THE FOREVER KING.
There's not a lot of dallying about as the action kicks in pretty quickly from the opening pages.  War is in the air and the empire is cracking down on magic whenever and wherever they see it.  Yet there are still some who haven't been touched by the empire's purge and it is they who hold the hope of a return to freedom once again, led by the Outlaw King in hiding.  We follow much of the storyline of the rebels through their newest member, Mithrid, who embodies everything that Emperor Malvus holds in contempt.
Does this band of rebels really have what it takes to take on the emperor's well-trained and brutal forces?  Can they marshal enough strength before those forces root them out the same way they have others who have dared try to stand against them?  As these two factions get perilously close to all-out war, who will gain the upper hand and what will that mean for the future of Emaneska and Scalussen?
I had such a blast reading this book for a variety of reasons.  Obviously the big reason is the story is so darn great and takes a number of different turns that I wasn't expecting.  The theme of a ruler who suppresses information about the nature and use of magic, and the twisting of that information to shape it so that the populace almost accepts that it is a crime against the empire, was chilling to say the least.  We all know our recent history and how misinformation can lead to some devastating consequences.  The same can be said in this fantasy world as well as Mithrid has been raised believing a certain narrative, yet is forced to question those beliefs as she gets another side of the story.  It was also nice to get treated to a reunion with some of the familiar characters from the previous series, albeit much affected by their past ordeals.
The world-building and magic is turned up to a high degree in this book as we see incredible sorcery (some quite dark) as well as talking dragons, and ships containing floating libraries of outlawed magic books that have been spirited away from the emperor's clutches in an effort to preserve the forbidden knowledge contained in them.  The library ships were something that I found an especially cool idea given how the empire so desperately wishes to eradicate any reference to magic whatsoever in order to maintain their vicious stranglehold.
All in all I thought that this was an excellent beginning to this brand new series from Ben Galley.  The trademark tight writing is there throughout and I gobbled this one up in no time flat.  If you enjoy entertaining fantasy that is epic in scope, filled with imaginative magic, thrilling adventure, and some evil bastard antagonists to hate on, then you should read THE FOREVER KING as soon as possible.  And while you are at it, check out his other books too because he is just an amazing writer and someone who consistently hits the mark with regard to originality and quality.
Overall Rating: