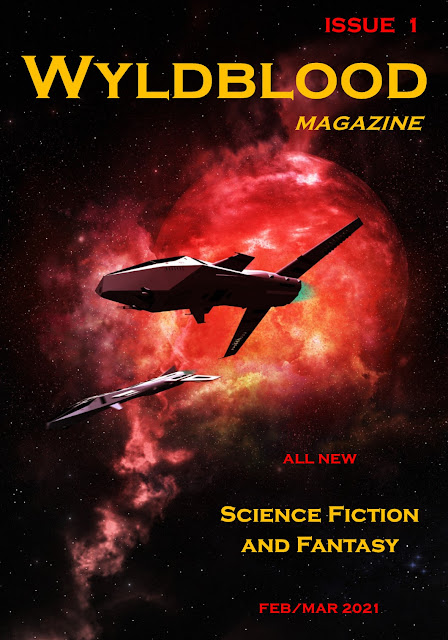 Wyldblood Press has officially launched the inaugural issue of its brand new speculative fiction magazine WYLDBLOOD MAGAZINE!  I was excited to be able to obtain a review issue from Editor Mark Bilsborough, as the descriptions of many of the stories in it really piqued my interest.  So a special thanks goes out to Mark and everyone at Wyldblood Press for forwarding me a copy.  The bottom line is I had a whole lot of fun reading it.  There's so much to like and I will just begin by mentioning the super entertaining tales that you will find in the Feb/Mar 2021 issue.
In a COAL DUST AND SHADOWS by Holley Cornetto, we follow a girl who is  discovered in an abandoned stretch of a small town mine and apparently can speak telepathically.  Grace is really only interested in communicating with Preston, one of the sons of the miner who found her.  As they become friends, Grace cryptically alludes to what might happen if the town goes ahead with their plan of digging deeper in their current location.  What is hidden within the unexplored depths below the mine and what connection does this mysterious girl who nobody has ever seen before have with it?
THAWING by JL George gives us the story of a young boy who becomes obsessed with a statue in the middle of the square of his home town after his father tells him the mythical story behind it.  The boy becomes convinced that the statue is not a statue at all but actually the princess Eira encased in ice.  Legend has it that she battled numerous dragons and saved the city centuries ago.  Is he correct that the statue is really Eira watching over the city but trapped in an icy cocoon?  And what would happen if that ice were to ever melt? 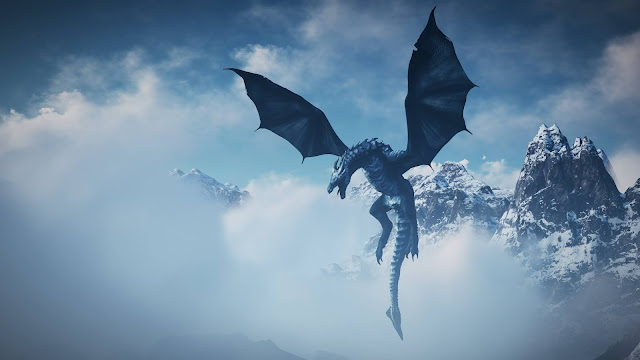 Then we have THE BUTCHER'S DOG by Peri Dwyer Worrell, which pretty obvious by its title, is about a dog.   But this is no ordinary dog, especially after being injected with an unusual liquid by his new owner that makes him have special powers.   Man's best friend may just be man's worst enemy when all is said and done.
These are just three of the eleven fascinating SFF stories that you will find in the first issue of Wyldblood Magazine.  In addition you will find stories by Bonnie West, Sydney Paige Guerrero, Mark Rigney, Jacey Bedford, Robert Borski, Rosemary Sgroi, Stephanie Kraner, and Dorothy A. Winsor.  You will want to read them all because each is very different and diverse in content and characterization.  But they all had me joyously entertained as I jumped from one to the other.
There's also a really insightful interview with the author of THREADING THE LABYRINTH, Tiffani Angus.  In the interview she touches on a number of subjects including the challenges of being an American author writing from a British perspective, as well as how she came up with the magic system in her story.  It's a very cool interview that is definitely worth checking out.
But that's not all!  There is even more cool stuff packed into issue #1.  You can also check out some book reviews from Editor Mark Bilsborough of THE DOORS OF EDEN by Adrian Tchaikovsky, GOLDILOCKS by Laura Lam, THE POISON SONG by Jen Williams, WORLD ENGINES: DESTROYER by Stephen Baxter, and BONE SILENCE by Alastair Reynolds.  I must say that I found the reviews to be thorough and honest.  Mark didn't love every one of these books either, so you'll want to find out what he thought about them.
All in all I was really impressed with this first issue of WYLDBLOOD MAGAZINE.  There was so much to enjoy and I really think that as more issues come out, it will only get better.  This is certainly something that all fans of SFF and speculative fiction should be reading.  Fun and entertaining stories, interviews, book reviews, this mag has it all and I look forward to every forthcoming issue with great anticipation.
You can purchase a copy/subscription to WYLDBLOOD MAGAZINE on the Wyldblood Press website by clicking HERE.
Thanks as always for visiting Out of This World SFF Reviews and Happy Reading!
-Nick
SFF Magazine Wyldblood Press