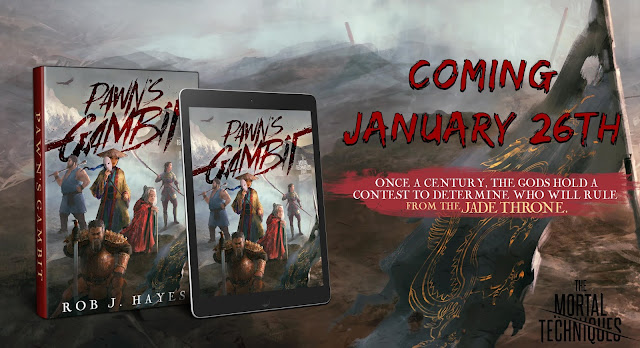 Out of This World SFF reviews is delighted to be just one of the many blogs participating in the Rob J. Hayes PAWN'S GAMBIT blog tour, hosted by Fantasy Book Critic!   PAWN'S GAMBIT is a standalone book set in the same Mortal Techniques world as Rob's highly acclaimed #SPFBO5 finalist, Never Die.  The book will officially be released on January 26th, but as part of this tour, all of the participants obtained an advance copy.  Soon I will be giving you my official review of the book as well as a brief synopsis.  But first I would just like to mention Felix Ortiz and Shawn T. King, whose brilliant artwork and typography/design really brings this series to life in an incredible way.  Stunning is all I can say. 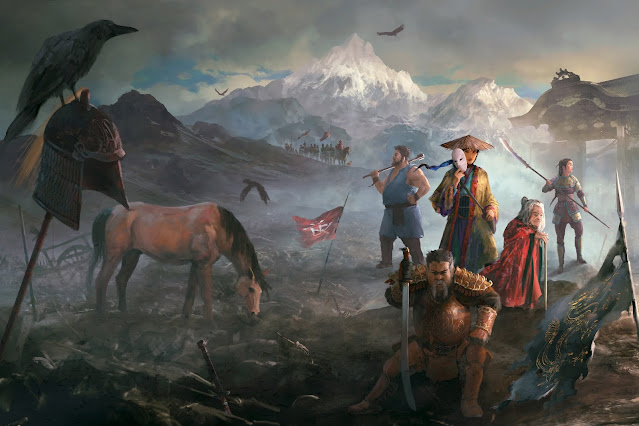 And now for a brief synopsis of PAWN'S GAMBIT followed by my review.
Once a century, the gods hold a contest to determine who will rule from the Jade Throne.  Each god chooses a mortal champion, and the fate of heaven and earth depends on the winner.
Once a world-renowned strategist and general, Yuu made one wrong move, and the Steel Prince paid for her mistake with his life.  Now on the run, she relies on her wits to evade royal bounty hunters.  But what if there is a way to bring back her dead prince?
On a playing board full of heroes, warriors, assassins, and thieves, can Yuu survive long enough to even learn the rules of the game, let alone master it? 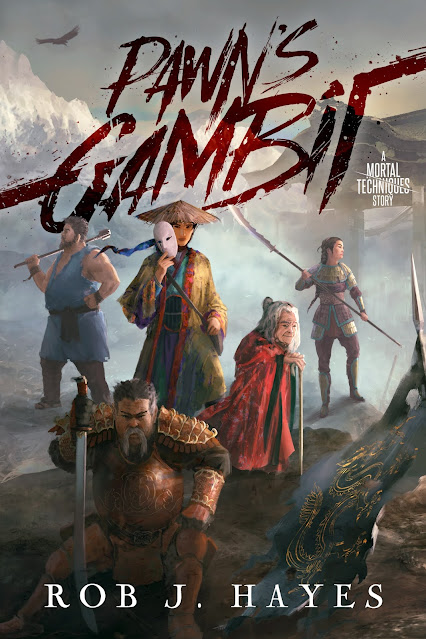 Review:
Anyone who is a frequent visitor to my blog knows that I am a huge fan of Rob J. Hayes.  I've reviewed a number of his books and the common theme that always prevails is that I am going to enjoy anything he writes.  Rob has the flexibility to write stories that are completely different from the ones before and yet the high quality is always there in my opinion.  I'm happy to say that PAWN'S GAMBIT continues that trend and quite honestly, I wasn't really surprised.
The book takes place quite a few years after the events in Never Die.  The time has come for the gods to see who will lead them for the next century.  This will be determined through a competition.  In this case, the competition is a scavenger hunt of sorts to collect a specific number of powerful magical artifacts that are hidden in different areas in the human world.  There are a few catches that make the contest an even more difficult one.  One of them being that these artifacts can only be collected by a human, sponsored by each god.  Oh, and the gods can't assist directly in any way, making the recovery of these artifacts all the more challenging.
The two main characters in PAWN'S GAMBIT are Yuu, also known as The Art of War,  and the goddess Natsuko.  Throughout the book we follow the two as they progress through the near-impossible competition of capturing each mysterious object.  Natsuko's professed aim is to win the hunt at all costs so that the god of war Batu can be removed from the Jade Throne and finally free the world from 100 more years of bloodshed, war, and despair.  Is this really her desired outcome, or are there motivations that go beyond what she claims?  And what part will Yuu play in all of this if she does happen to be able to collect all of the artifacts?
I really enjoyed this book a lot and part of the reason why is that it is so quickly paced.  It doesn't take long for you to be dumped right into the action after a brief setup.  The relic hunting aspect of this fantasy story made it a nice departure from Never Die as a fully standalone entry, yet there are enough nods to its predecessor to create a slight bit of nostalgia at times.  The action is breakneck in this one and you won't find a lot of quiet reflective passages.  That's not to say that there isn't any character development though, as Yuu especially evolves considerably from the beginning of the story to the climax.
I found the relationship between the goddess Natsuko and her champion Yuu to be a truly compelling and complicated one.  It's obvious that Yuu doesn't fully trust her almighty benefactor but really has no choice in the matter.  Conversely, Natsuko needs Yuu to accomplish her final goal and it's increasingly clear as the story plays out that she chose her for a specific reason.  There's a good deal of mystery, which Hayes usually inserts into his books, and that is also what made PAWN'S GAMBIT an even more rewarding read for me.
As with most of Rob's books, he also does a fine job of including a significant amount of super cool magic and the world-building is never an area where Hayes slacks either.  All in all, I recommend this book to anyone who enjoys a fantasy story that is rife with dangerous moments, daring escapes, vindictive gods at war with each other, and superb storytelling that only Rob J. Hayes can deliver.  It's also a very quick read and the page count is not daunting at all compared to many other books in the genre.
This is another sterling winner of a book from an author who is at the very top of his game right now.  The Mortal Techniques series is truly one of the more unique series that I've come across and I can only hope that this isn't the last we've seen from this world.  Something tells me it won't be.  Be sure to grab yourself a copy of this one when it is released on January 26th.  You can pre-order it on Amazon by clicking HERE.
Overall Rating: 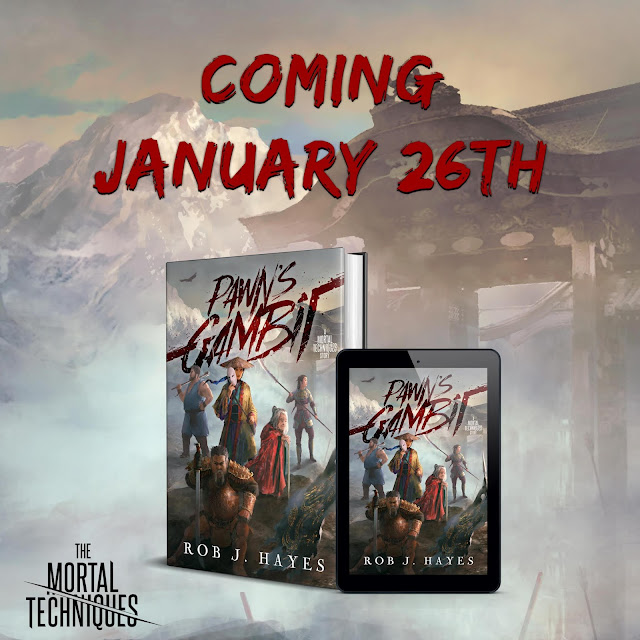 And that wraps up my stop on the tour!  I hope you enjoyed finding out a little more about PAWN'S GAMBIT and the Mortal Techniques series.  I recommend checking out the two previous tour stops from Petrik at Novel Notions and Lynn at Grimmedian.  Tomorrow's stop will be brought to you by Hamad at The Book Prescription.  This is an incredible tour and you aren't going to want to miss any of these stops.  I'd like to end by thanking Fantasy Book Critic for hosting and coordinating the tour.  It is an honor to be included with the other amazing blogs taking part.
Thanks as always for visiting and Happy Reading!
-Nick
Blog Tours Epic Fantasy Pawn's Gambit Rob J. Hayes Self-Published