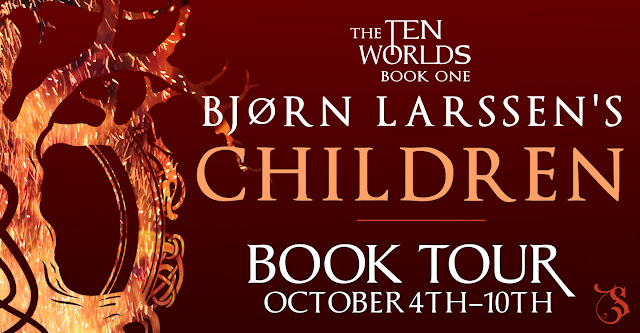 Out of This World SFF Reviews is absolutely delighted to be just one of the many blogs participating in the Storytellers On Tour Book Tour featuring author Bjorn Larssen and his Norse-inspired historical fantasy book, CHILDREN!  Today is the very first day of the tour and I am very excited to be kicking it off with a couple of my other blogger colleagues.  I will soon be providing you with a synopsis of the book, my review, as well as some important links and Bjorn's bio.
And now, here is a brief synopsis of Bjorn Larssen's CHILDREN, followed by my review. 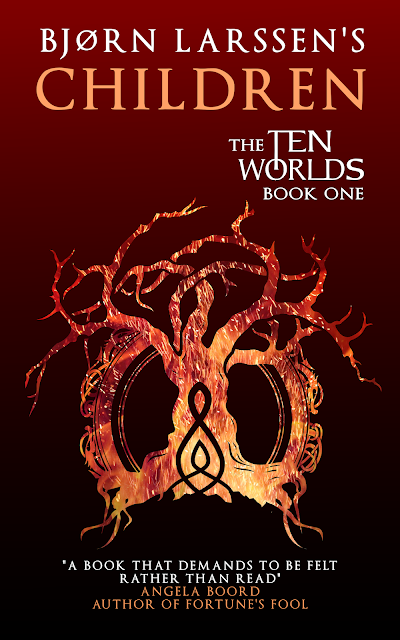 Book Blurb:
Magni never wanted to be like his father, a murderous, absent, cheating alcoholic: Thor - the feared and beloved God of thunder.  When Thor destroys everything and everyone his son knows and loves, Magni vows to stop the violence.  His dream is to bring peace and prosperity to the Nine Worlds, then settle down with the man he loves.  But is it possible to remain good in  place this bad?  How do you escape cruelty in a universe built on it?  or the shadow of your father when everyone calls you by his name?
Maya knows she's a failure and a disappointment to her foster parents.  How could a child raise by Freya and Freyr - Goddess of love and God of sex - have no interest in the greatest of pleasures?  Obviously, it couldn't be the torture they subjected her to, or treating her as a tool that might someday be useful.  Maya, her rage at their games more powerful than she knows, wants freedom to pursue her own destiny.  But how do you forge your own life away from your God-parents when you're nothing more than human?
A retelling of the Norse myths unlike any other, Children will answer all the questions you never knew you had about the heathen Nine Worlds... before leading you into the Tenth.
Review:
The first thing that you notice about Bjorn Larssen's CHILDREN is the stunningly gorgeous cover.  I mean, this is some dazzling work and it draws you in immediately to want to find out more about it.  Then as you begin reading the book you realize that as gorgeous as the cover is, the prose is just as gorgeous, if not more so.  I was immediately struck by both the depth of the characters and the flawless dialogue that made me laugh most of the time, and yes I admit, shed a tear on a few occasions as well.  It's really difficult to get me to buy in that much to make me emotional while reading a story, since I'm a bit of a cynic by nature.  But damn if Bjorn Larssen didn't make me care about every single character in this book, even the ones that only make a passing appearance.
But let's get to the heart of this book, which is the incredibly well-told story that makes you want to keep turning the pages, and turning, and turning.  If you love Norse mythology and also historical fantasy, then you will love CHILDREN as this is one of the very best books I've ever read that deals with the Norse gods and legends.  What makes this book a cut above the others is that it also turns the conventional wisdom of how we view these gods on its head quite a bit.  Truly the best retellings do this in my opinion, take a well known tale but twist it in such a way that you could almost say they reinvent the same tired old story.
By relaying the story of CHILDREN through the eyes of two very different descendants Magni and Maya, Larssen has gifted the reader with a fresh take on the Norse mythology that we have come to know up to this point.  Both living in the shadows of their legendary predecessors, and both extremely worse for the wear, we get to see through alternating chapter POVs how each deals with their own personal abuses and neglect.  Be warned that none of it is sugarcoated in the least, and in a way this is another thing that makes this book great, its willingness to lay bare both the good and the bad and have us experience every thought and action right along with the characters on a personal level.
This book is about as raw and brutal a read as you can come by but it is also incredibly moving and never makes you feel like there's not something worth salvaging in the end.  I was really blown away by CHILDREN and am here to say that if you don't read this book, you are seriously missing out on a rare talent right now by the name of Bjorn Larssen.  He will not hold your hand and tell you everything that you need to know explicitly, but he will ask you to work a little for what is a phenomenal payoff if you just invest a little time and attention.  The true testament to how this book moved me is that I couldn't get it out of my head for the entire day after finishing it.  In fact I even went back and read the final chapter again because I wanted to experience it fully just one more time.  I don't have much more to say other than get this book and read it if you appreciate a story that is told in such a way that you feel like you live it with every word, sentence, and page.
Rating: 9.5/10
You can purchase CHILDREN on Amazon by clicking HERE.
Author Bio 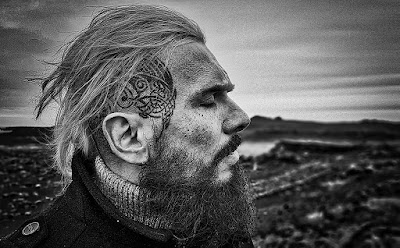 Bjorn Larssen is a Norse heathen made in Poland, but mostly located in a Dutch suburb, except for his heart which he lost in Iceland.  Born in 1977, he self-published his first graphic novel at the age of seven in a limited edition of one, following this achievement several decades later with his first book containing multiple sentences and winning awards he didn't design himself.  His writing is described as "dark" and "literary", but he remains incapable of taking anything seriously for more than 60 seconds.
Bjorn has a degree in mathematics and has worked as a graphic designer, a model, a bartender, and a blacksmith (not all at the same time).  His hobbies include sitting by open fires, dressing like an extra from Vikings, installing operating systems, and dreaming about living in a log cabin in the north of Iceland.  He owns one (1) husband and is owned by one (1) neighbourhood cat.
You can connect with Bjorn virtually on his Website, Twitter, Facebook, and Goodreads.
And that concludes my stop on the CHILDREN book tour!  I would like to extend a special thank you to Storytellers On Tour and author Bjorn Larssen for the opportunity to participate.  There are many more awesome stops on this tour, so if you would like to follow along, below is the official schedule. 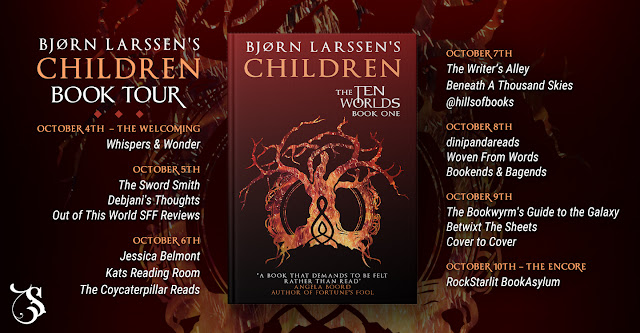 Thank you as always for supporting Out of This World SFF Reviews.  Every single visit and page view is so very much appreciated and is never taken for granted.
Happy Reading!
-Nick
Bjorn Larssen Book Tours Children Norse Mythology Self-Published Storytellers On Tour