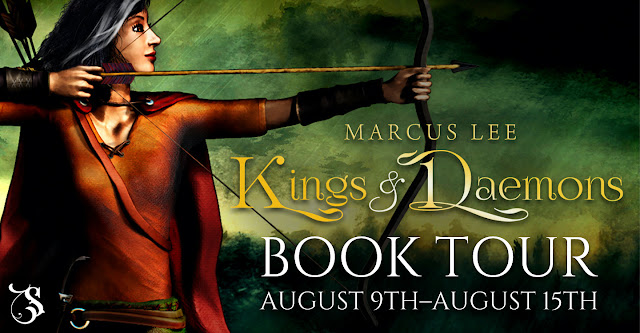 Out of This World SFF Reviews is pleased to be just one of the many blogs participating in the Storytellers On Tour Book Tour featuring self-published fantasy author Marcus Lee and his book, KINGS AND DAEMONS!  Today marks Day #2 of the tour and I am very excited to be one of the stops. I will soon be providing you with a synopsis of the book, my review, as well as some important links and Marcus's bio.

But first I'd just like to mention that Storytellers is currently running a fantastic giveaway in conjunction with this tour.  Five paperback copies of KINGS AND DAEMONS will be up for grabs! (one copy per winner, UK entrants only) 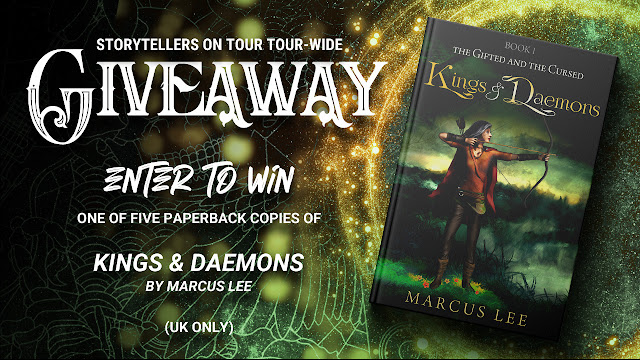 To enter, just click this link.  The giveaway ends this Sunday, August 16th at 11:59pm, so get those entries in now!
And now, here is a brief description of Marcus Lee's epic fantasy novel KINGS AND DAEMONS! 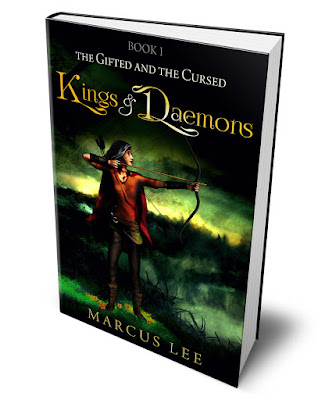 Book Blurb:
A tale of conquest, dark kings, and daemonic heroes.  A spellbinding story that will enchant you with its plot of ambition, love, betrayal, sacrifice, and redemption.

Over fifty years have passed since Daleth the seemingly immortal Witch-King and his army conquered the Ember Kingdom.

Now, with the once fertile lands and its enslaved people dying around him, the Witch-King driven by his insatiable thirst for eternal youth, prepares his forces to march on the prosperous neighboring Freestates.  It will be the beginnings of a conquest that could destroy nations, bringing death and destruction on an unimaginable scale.

Then, when a peasant huntress whose rare gift was concealed from birth is exposed, in sets in motion a chain of events that could alter the destiny of generations to come.

My Review:
KINGS AND DAEMONS is a multi-perspective fantasy tale that takes the reader on an exciting journey that both entertains and gives all of the familiar traditional fantasy feels that made me fall in love with the genre to begin with.  That being said, this is by no means a standard or tropey story at all as there are a couple of twists that make this book wholly original in both concept and execution.  The insertion of daemons who control a few of the characters creates an atmosphere of unpredictability and angst that really make it an engaging read.

The Witch-King in particular is a dastardly fellow whose only pleasure derives from seeing others die slow and painful deaths at his hands.  His constant obsession with conquest is also a problem for the neighboring Freestates and the territories beyond.  I put him right up there with some of the most evil antagonists in the genre and he never fails to deliver when it comes to cruelty and downright malice.  I'm trying not to give away too much of the plot so I'll just say that the Witch-King is not unopposed and has his share of those who would attempt to take him down before his vile plans can be carried out.  But will they succeed in thwarting him?  I'm not telling, so you'll have to find out for yourself.

Marcus Lee has succeeded in crafting a terrific story that at times gets pretty dark.  The daemon aspect really gave the book almost a horror feel to it at times, so it also scratched that particular itch for me and satisfied on many different levels.  It's a very easy read, so much so that I found myself consuming large chunks of the book in one sitting.  Another thing that I particularly enjoyed were the backstories of the characters who we are introduced to before knowing anything that came before.  Marcus does a wonderful job of info dumping without it seeming like an info dump through reflections of the characters and dialogue.  It never seems clumsy, but rather a natural flow within the story.  As these histories are revealed slowly, I began to get a better picture of the motivations of each main character.

In the end I came away feeling as if I read a very well-written fantasy epic that hearkened back to my very first reads in the genre.  I enjoyed KINGS AND DAEMONS a great deal and would recommend it to both the seasoned fantasy reader and also those just starting out and wanting something to hook them on the genre.  It has an accessibility that is unmistakable and should appeal to many readers.  I look forward to reading many more books by Marcus Lee if this one is any indication of what is to come  The sky is the limit as far as I'm concerned.

You can purchase KINGS AND DAEMONS on Amazon by clicking this link. 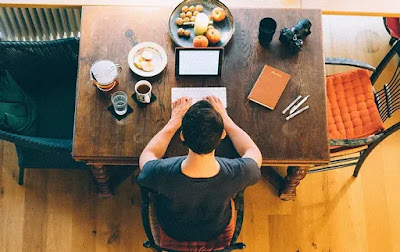 Writing hasn't always been a serious hobby for me... but it has always been there, lurking in the shadows, serving me well when called upon.

As I look back over the years, I realise I was guilty of writing many short stories, as well as poetry, and I'd like to think that even if they were never intended to be published, they were nonetheless warmly received by the intended recipients.

Then in 2019, I was inspired to write not just a short story, or poetry, but a book.  Then, suddenly, one book turned into a trilogy and a labour of love, and it was a love I wanted to share with the world.

So, here we are.  The pandemic that put my career in sport on hold also gave me the opportunity to lavish time on my alternative hobby, or if demand dictates my new career.

However, only you, the reader, will decide whether this trilogy, which is still a work in progress, will be the first of many.  I genuinely hope so.

Who knows, now these creative juices are flowing, I might just keep on writing anyway.

Epic Fantasy has been my favourite genre since I first read The Odyssey and The Illiad as a seven-year-old.  Now it's my turn to see if I can bring another world to life in the imagination of others.

You can connect with Marcus Lee on these online platforms:

And that concludes my stop on the KINGS AND DAEMONS book tour!  I would like to extend a special thank you to Storytellers On Tour and author Marcus Lee for the opportunity to participate.  There are many more awesome stops to come, so if you would like to follow along, here is the official tour schedule: 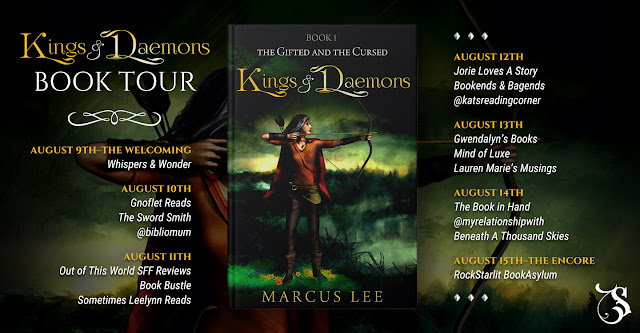 Thanks for checking out my stop on the tour and as always for your continued support of Out of This World SFF Reviews.  It is forever appreciated and never taken for granted.