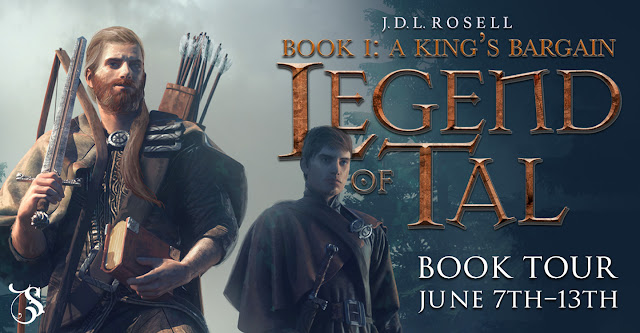 Out of This World SFF Reviews is extremely pumped to be just one of the many blogs participating in the Storytellers On Tour Book Tour featuring self-published fantasy author J.D.L Rosell and his first book in the Legend of Tal series, A KING'S BARGAIN!  Today marks Day #4 of the tour and I am very honored to be one of the stops. I will be providing you with a synopsis of Josiah's book and then giving a special sneak peek if you will, at an excerpt. So please stick around for that.


Storytellers is also currently running an amazing international giveaway in conjunction with this tour.  One paperback copy and five ebook copies of A KING'S BARGAIN are up for grabs!
To enter, just click this link.  Only one prize per person and the giveaway ends this Sunday, June 14th at 11:59pm. So get those entries in now!

And now, without further ado, here is a brief description of A KING'S BARGAIN followed by my review..... 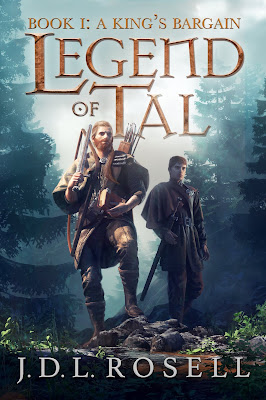 Book Blurb:
The legend of Tal Harrenfel is sung across the Westreach - and with each telling, the tales grow taller.  But though he's declared a hero by his King, Tal has never claimed to be more than a man....

After three decades of fighting warlocks, killing mythical beasts, and hunting enchanted treasure, Tal has had enough.  Running from the deeds of his past, he retreats to his home village under a different name and meets an unlikely companion: Garin a village boy who dreams of making a name for himself and seeing the world beyond their sleepy town.

When Tal receives a mysterious visitor, both he and Garin find themselves thrown into a sojourn across the kingdom.  Soon, they become embroiled in the plots of monarchs, on the frontlines of an ancient war, and at the mercy of a fabled sorcerer.

Now Tal must live up to his legend and Garin discover his own power, to survive the forces pitted against them.

Name of the Wind meets Witcher in A King's bargain, an intertwining sword and sorcery adventure and coming of age tale.  If you like The Wheel of Time, The Dragonbone Chair, or The Stormlight Archive, you'll love the captivating world of Legend of Tal! 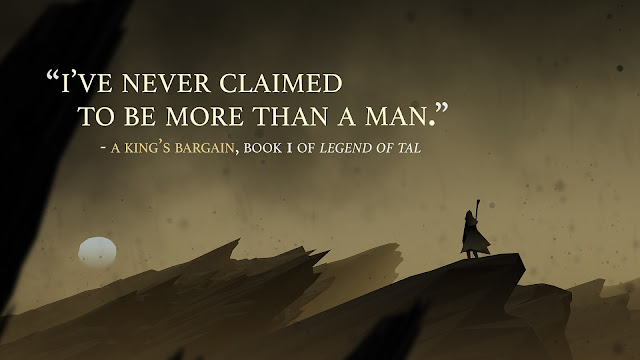 A KING'S BARGAIN was such a nice breath of fresh air for me as I had recently just come off reading a couple of books that didn't really connect with me.  When I first began reading it I couldn't help but draw some comparisons to the Dragonlance books by Margaret Weis and Tracy Hickman that I loved so much in my younger days.  The story definitely had that type of feel for me (minus the dragons).  This is a quest fantasy with a central mystery at its heart that involves the legendary Tal Harrenfel and his two companions Aelyn and Garin as they attempt to discover who in the King's court is a traitor and potential assassin.  Making things even more complicated is the fact that in all likelihood the infiltrator may have the ability to shapeshift into any persona they wish.  In this book, friend could be enemy and nothing is very well what it seems.  The only question that remains is can Tal summon up the courage and guile of a time long gone by to put a stop to the evil perpetrator and discover who else may be behind the treachery brewing within the kingdom.

I found this book extremely hard to put down and that is really the best testament I can give to how much I enjoyed the overall story, characters, and world-building.  While much of the themes and plot are similar to many other fantasy books, there was something special about A KING'S BARGAIN that made it seem wholly original and fresh in my mind.  The characters were incredibly well fleshed out and young Garin especially shows a significant amount of growth from the early chapters until the end.  And what an ending it is by the way!  I can't say enough about how pleasantly surprised I was by this fantasy tale and how much I need book 2 in my hands as soon as possible!  Read A KING'S BARGAIN by J.D.L. Rosell, you won't be sorry that you did.  Excellent heroic fantasy mixed with sword & sorcery that will keep you turning the pages feverishly to find out what happens next.  All in all a very fun and entertaining ride. 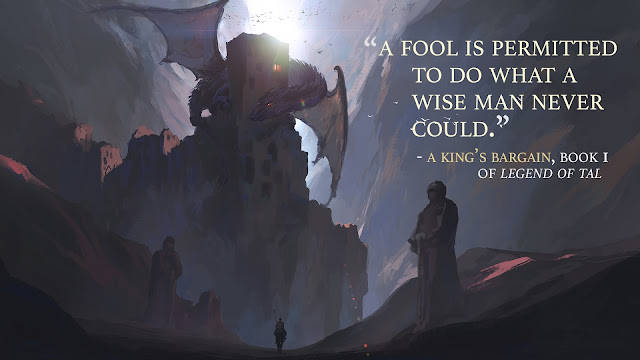 And now, I have a special treat for everyone....an excerpt from A KING'S BARGAIN!

Bran settled in a chair across from his guest and smiled like they were old friends.
The house was nothing to look at, he well knew: two rooms large, with a ragged curtain separating them; a small wood stove settled behind him, and a well-used pot and pan, travel-ready, hanging above it. As rain began to patter against the roof, the usual leaks started up in the corners.
He didn't care to impress folks, not anymore, and this man least of all. But he'd helped his guest over the stoop like a nobleman might usher a lady into his bedroom, and ignored the man's protests that he needed no assistance in a similarly lofty manner.
Gallantry, he'd often found, suited a liar like a cape fit a king.
Garin squirmed in the seat next to them, but Bran paid him no mind as he took his glass and threw it back. He sighed as the liquid burned its way down his throat to settle a steady warmth in his gut. "Say what you want about Crazy Ean, but he makes a damn fine whiskey."
"So says anyone mad enough to try it," Garin muttered.
Bran grinned at him. "Life is short and dark as it is. May as well brighten it with a few glorious risks."
The youth shrugged.
He turned his gaze to the guest again, who hadn't touched his glass. "I know your name, Aelyn, and you know ours. The table is set. Now lay out what you want, or we'll have to settle on beans and roots for dinner."
Aelyn hadn't removed his hat, but even with his eyes shadowed, they seemed to gleam. "You know what I want. I'm not idly used as a messenger. But I obey my commands."
He lifted his hand to reveal a small, shining band resting in his palm, then set it on the table. Garin stared at it, mouth open wide. Bran found he was unable to resist looking himself, though he knew its kind well. Not a ring of silver or gold or copper, but milky white crystal, with a steady glow from within its clouded center.
"What is it?" Garin asked, sounding as if he wished he hadn't spoken but was unable to resist.
Aelyn didn't answer but kept his steady, orange gaze on Bran, like a raptor on a hare.
Bran sighed. "It's a Binding Ring. An artifact of oaths that holds the wearer to a promise."
Garin might be a man grown to the villagers, but he looked a boy at that moment, his eyes wide, his mouth forming a small "o."
"Like… a magic ring?" the youth ventured.
"Enough of this!" Aelyn snapped. "Take it and put it on. We must be returning immediately."
"Off so soon? But you haven't touched your drink."
The man snorted. "If I wished to poison myself, I have a thousand better ways than that human swill. Don that ring. Now." His fiery eyes slid over to Garin. "Or do you want the boy to know your true name?"
Bran studied him. A feeling, hard as flint, was starting behind his eyes. A feeling familiar as a distant memory. A feeling he'd hoped to have dug a deep grave and buried in the past. As it rose, a warmth unconnected to the whiskey began coursing through his body. Dread? he mocked himself. Or anticipation?
He reached a hand forward, finger brushing the crystal. It was warm to the touch. From past experience, he knew it remained warm most of the time. So long as the wearer kept to what he was bound. If he didn't, a mountain peak in winter would be preferable punishment.
Aelyn's eyes watched. Wary. Waiting.
Bran scooped up the ring, vaulted across the table, and shouted, "Heshidal bauchdid!"
The man jerked, then stiffened in his chair, eyes wide with surprise, hat knocked askew. Bran took his moment, snatching one of the smooth hands and slipping the ring over a long finger.
As Aelyn shivered free of the binding, his mouth stuttered, "Bastard of a pig-blooded whore—!"
"Quiet down!" Bran shouted over him. "This I bind you to: That you will wear this ring until I am safely back in Hunt's Hollow. That you will tell no one that you wear this ring instead of me. That you will tell no one my true name unless I bid it. And that you won't harm the boy Garin or myself in that time."
The ring shone brightly for a moment, and Aelyn shuddered, eyes squeezed shut, teeth braced in a grimace. A moment later, the ring dimmed, and Bran released his guest's hand. As he settled into his chair, brushing back the hairs that had worked loose of his tail, his blood began to cool again.
"Now," he said as he reached for the whiskey bottle, which had fallen over in the struggle, and pulled out the stopper. "You sure you don't want any of this human swill?"
The man raised his hand and stared at the crystal ring, horror spreading across his face. "She told you, didn't she? She told you my true name."
Bran poured a glass, then proffered it to the youth, who stared at him as if he were the stranger. "Feeling mad enough yet?"
Garin took the glass, threw it back, and promptly coughed half of it back up.
"There you are, Garin, there you are," Bran said, thumping his back. "You'll learn to swallow it all before long." 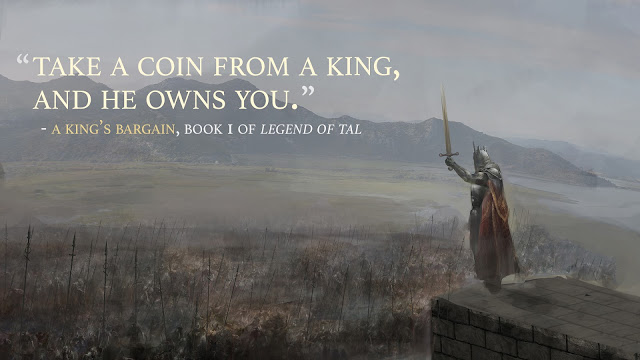 You can connect with author J.D.L. Rosell online by clicking the following links: 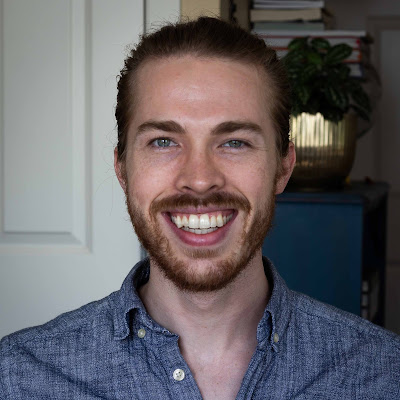 J.D.L. Rosell is the author of the dark epic fantasy series The Famine Cycle, the fast-paced LitRPG/Gamelit series The Everlands, and the sword-and-sorcery series Legend of Tal.  He also writes some serialized books, including the Nordic epic fantasy The Frozen Throne, which has over 100k views on Wattpad.

Previously, J.D.L. Rosell earned an MA in Creative Writing and has written as a ghostwriter.  Always drawn to the outdoors, he gets out into nature whenever he can and indulges in his hobbies of hiking and photography.  But most of the time, he can be found curled up with a good book at home with his fiancee and two cats Zelda and Abenthy.

And there you have it, my stop on the A KING'S BARGAIN book tour!  I would like to extend my sincere thanks to my friends at Storytellers On Tour and author J.D.L. Rosell for allowing me to take part in this awesome tour.  If you would like to follow along with all of the other stops, here is the official schedule: 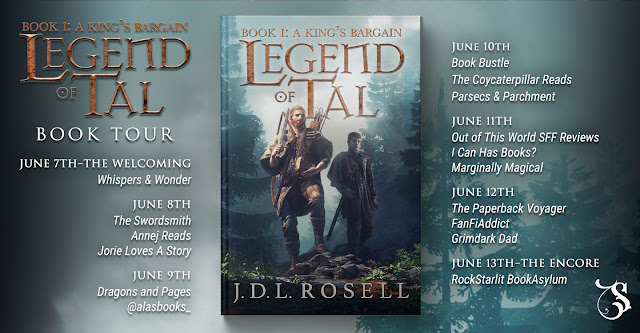 Thanks as always for visiting the blog and Happy Reading!
-Nick