Book Tour: A RITUAL OF BONE by Lee Conley 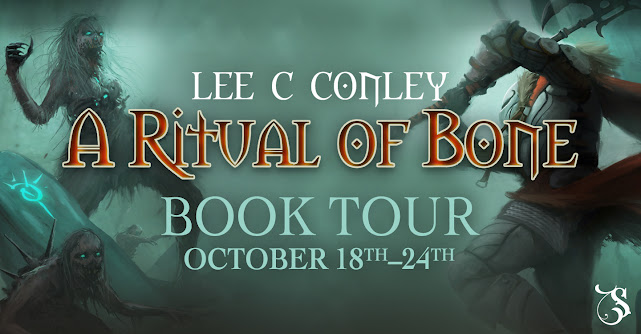 Out of This World SFF Reviews is extremely delighted to be just one of the many blogs participating in the Storytellers On Tour Book Tour featuring author Lee Conley and his horror-infused dark fantasy book, A RITUAL OF BONE!  Today is day #2 of the tour and I am very excited to be bringing you some cool info regarding this book of The Dead Sagas series.  I will soon be providing you with a synopsis of A RITUAL OF BONE along with my official review and some additional links to connect with Lee and his fantastic books.
It's important to mention that Lee has just also recently released the sequel to this compelling dark fantasy titled, A Ritual of Flesh! (which you can find a review of on this blog as well) 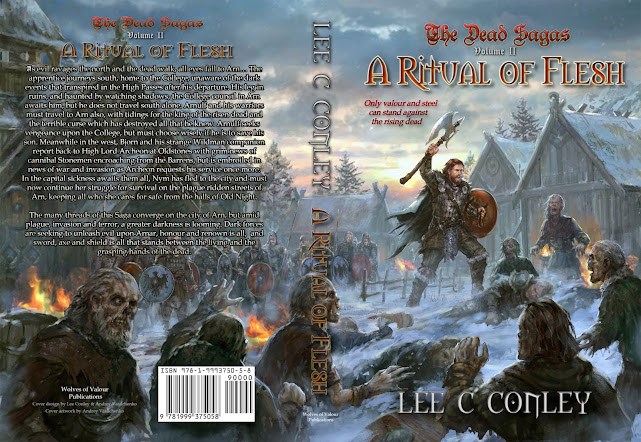 Purchase A Ritual of Flesh on Amazon.
And to further celebrate this newest release, Storytellers and author Lee Conley are giving away one signed hardcover of A RITUAL OF BONE! (Open Internationally).  But that's not all!  FIVE runner-ups will receive their choice of either an audiobook copy (US/UK) or ebook! (International) 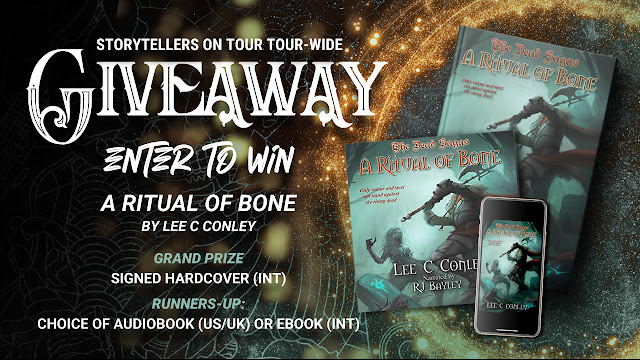 To enter, just click this link.  The giveaway ends this Sunday, October 26th at 11:59pm, so get those entries in now!


But without further ado, here is a brief description of Book 1 in Lee Conley's The Dead Sagas, A RITUAL OF BONE, followed by my review. 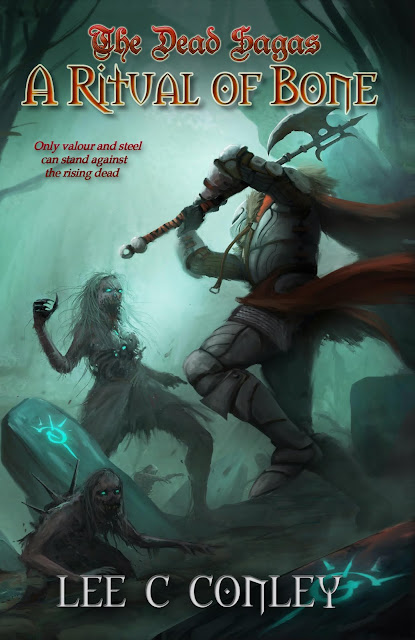 Book Blurb:
"Only valour and steel can stand against the rising dead."
Arnar is a land of warriors, its people as stalwart as the stones themselves.  In a land of dark forests and ancient hill forts, a forgotten evil is awoken by curious minds.
The great Histories and the Sagas say nothing of this evil, long passed from the memory of even the studious scholars of The College.  For centuries, the scholars of Arnar have kept these records and preserved the knowledge and great deeds of a proud people.  The story of these peoples forever chronicled in the Sagas of the Great Histories.
But now the evil spreads and the dead walk in its wake, terrible creatures roam the night and even the spirits are restless.  The Dead Sagas could perhaps be the final chapters of these great records.
Many threads entwine to tell this Saga, interweaving the tales of those who played their part in the search for answers and ultimately their fight for survival.  Amid plague, invasion and terror, the inexorable rise of the dead sends a kingdom scrabbling to its knees.
This Dark Fantasy Epic combines dark malign horror and gritty survival adventure as the Dead Sagas unfold in a world where honour and renown is all, where beasts and savages lurk in the wilderness, and where sword, axe and shield is all that stands between the living and the grasping hands of the dead.
Review:
I've read a lot of zombie fiction in my day and I've also read a ton of medieval fantasy, but never before have I read a book that melds the two into a singular story quite the way this one does.  A RITUAL OF BONE is the first volume in British author Lee Conley's The Dead Sagas series, and to say it is one of the more original works of horror fantasy that I have read in quite some time would be an understatement.  For one thing, the book is actually divided up into a number of separate smaller story lines that all converge in the end to make up one overarching main story.

One story line deals with Master Logan and his apprentice, who are playing with a magic that has long been forgotten but which has incredibly dark ramifications if used unwisely.  It seems that another Master of their order has found a way to bring the dead back to life and in his extreme hubris, he unleashes something that will allow the dead to walk freely again and in large numbers.  Logan and his apprentice are unwilling contributors but the Pandora's Box has already been opened and what that means for the kingdom of Arnar could be catastrophic when all is said and done.

Another story line tells the tale of Bjorn, who is a hunter being held captive by a cannibalistic tribe.  Very early on in the book Bjorn escapes his captivity but essentially runs out of the frying pan and into the fire (no pun intended) when his escape into the forest brings him face to face with the unspeakable horror that is amassing across the countryside.  Bjorn eventually teams up with an unlikely ally and utilizes his skills as a hunter to attempt to battle the menace that is slowly taking over every corner of his countryside.  Then there's the story of Arnulf, a commander of the guard of Arnar who is struggling to keep his men together as he sees many of them fall victim to a strange plague that causes them to bleed from every orifice and die in incredibly gruesome ways.  At the same time he also must protect his homeland from a strange invasion of undead creatures the likes of which has never been seen before.  Or has it?

Perhaps the only hope is to consult The Great Histories of the Dead Sagas in an effort to reveal certain clues of a long dead people that might stop the horrendous evil powers now loosed upon the world.  And yet another story line follows the travails of a woman named Nym who is simply trying to protect her little brother as they live in squalor in a putrid town where the only way for them to survive and eat is for her to sell her body.  Her struggle is perhaps the most compelling as her bravery and perseverance in the face of such wanton brutality is both honorable and inspiring.  She literally goes to any lengths to protect her brother, whom she loves more than anything.  What role will Nym have to play in the invading terror that is to come?  As these separate tales converge, we get the picture of a kingdom of Arnar battling for its very existence and the only hope for its survival may lie in the hands of the characters at the hearts of all of these storylines.

A RITUAL OF BONE is one of those books that came at the perfect time for me.  Obviously, we are close to Halloween and this book has so many horror elements in it that it felt like a really intense and scary read.  I enjoyed turning the pages well into the night over the past couple of weeks.  To dismiss this book as simply a zombie horror book would be to sell it very short however.  It is much more than that as this book strikes an incredible balance between horror and medieval fantasy.  I think this is the main reason why I enjoyed the book so much as it wasn't just a one-dimensional read.

I never felt like I was reading a splatter zombie adventure book because of the medieval setting and also the ever-changing story lines.  I'm not usually a fan of books that are broken into smaller stories but the author did an amazing job of seamlessly integrating different story lines into a cohesive book that ultimately felt unified.  It didn't ever feel like a collection of short stories to me and I always had this notion in my head as I was reading that all of these characters and stories were interconnected and essential to the eventual conclusion.  Yes there is a good deal of gore and blood but it wasn't done in a heavy-handed way and there was a great deal of suspense that counter balanced the really violent parts.

At the core of this book though is the stories of survival that we feel with every character and how the rampaging zombie evil affects each one in a different way.  We get to experience the struggle to stay alive against outrageous odds and as a result of that, we become intimate with these characters as we follow them along their individual journeys.  Please do give A RITUAL OF BONE by Lee Conley a try, especially if you enjoy medieval fantasy with a good deal of horror, adventure, and intrigue.  I liked this one a lot.
Rating: 8/10
You can purchase A RITUAL OF BONE on Amazon.
Author Bio 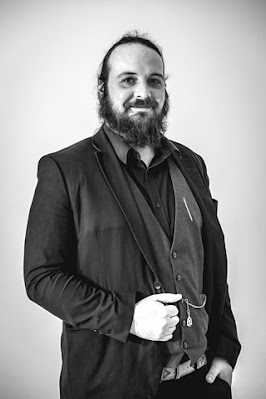 Lee is a musician and writer in Lincolnshire, UK.  He lives with his wife, Laura, and daughters, Luna and Anya, in the historic cathedral city of Lincoln.  Alongside a lifetime of playing guitar and immersing himself in the study of music and history, Lee is also a practitioner and instructor of historic martial arts and swordsmanship.  After writing his successful advanced guitar theory textbook The Guitar Teaches Grimoire, Lee turns his hand to writing fiction.  Lee is now studying a degree in creative writing and working on his debut fantasy series The Dead Sagas as well as also generally writing speculative fiction and horror.
If anyone would like to sign up for occasional (once or twice a year) email of news and updates on Lee's work, with the occasional competition or giveaway too, please sign yourselves up to Lee's mailing list.
You can also connect with Lee online via his Website, Twitter, Facebook, Instagram, Reddit, and Goodreads.
And that concludes my stop on the A RITUAL OF BONE book tour!  I would like to extend a special thank you to Storytellers On Tour and author Lee Conley for the opportunity to participate.  There are many more awesome stops on this tour, so if you would like to follow along, below is the official schedule. 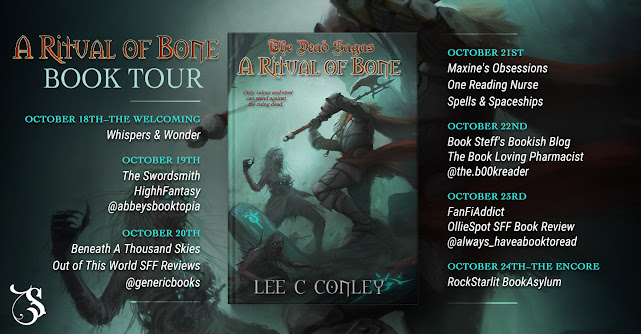 Thank you as always for supporting Out of This World SFF Reviews.  Every single visit and page view is so very much appreciated and is never taken for granted.
Happy Reading!
-Nick
A Ritual of Bone Book Tours Dark Fantasy Horror Lee Conley Storytellers On Tour
Reactions: