Book Review: A RITUAL OF FLESH by Lee C. Conley 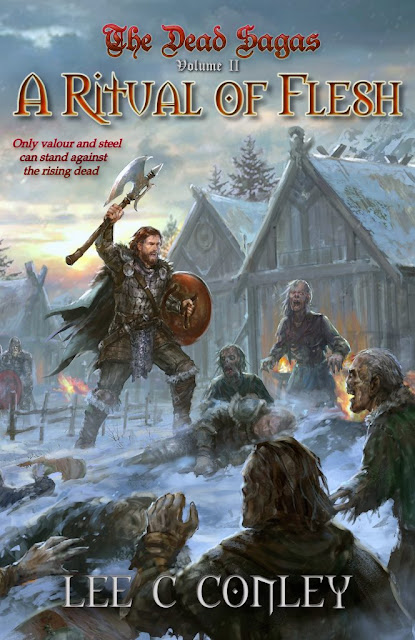 As evil ravages the north and the dead walk, all eyes fall to Arn... The apprentice journeys south, home to the College, unaware of the dark events that transpired in the High Passes after his departure.  His leg in ruins, and haunted by watching shadows, the College council in Arn awaits him, but he does not travel south alone.

Arnulf and his warriors must travel to Arn also, with tidings for the king of the risen dead and the terrible curse which has destroyed all that he knew.  Arnulf seeks vengeance upon the College, but must choose wisely if he is to save his son.  Meanwhile in the west, Bjorn and his strange Wildman companion report back to High Lord Archeon at Oldstones with grim news of cannibal Stonemen encroaching from the Barrens, but is embroiled in news of war and invasion as Archeon requests his service once more.

In the capital, sickness awaits them all, Nym has fled to the city and must now continue her struggle for survival on the plague ridden streets of Arn, keeping all who she cares for safe from the halls of Old Night.

The many threads of this Saga converge on the city of Arn, but amid plague, invasion and terror, a greater darkness is looming.  Dark forces are seeking to unleash evil upon Arnar, honour and renown is all, and sword, axe and shield is all that stands between the living and the grasping hands of the dead.

The Dead Sagas came to my attention a little over a year ago.  It was then that I read the first book in the series, A Ritual of Bone.  It immediately made an impact on me with its wonderful blending of horror and dark fantasy.  It definitely brought me back to my early reading days when I was obsessed with the Ravenloft books and that exact formula of fantasy/horror.  Fast forward to today and author Lee Conley was gracious enough to provide me with an advance copy of the eagerly anticipated second book in The Dead Sagas, A RITUAL OF FLESH.  This volume is quite a bit heftier than book one, but I tore through it so quickly that it could have been 100 pages shorter in length for all I knew.  And the cover is bloody spectacular as well.

A RITUAL OF FLESH begins not too long after the insanity that wrapped up the first book and we don't have to wait very long before things go to hell again, so to speak.  I'm going to stay away from specifics to avoid spoilers, but I will touch on some general elements that make this series so incredibly fun to read.  First, there's so much going on!  Plague, walking dead, war, political backstabbing, sorcery, a rich history and backstory, I mean if you love fantasy and could pick all of your favorite things to have in one story, this book and series covers all the bases.  It's one of the reasons why I never get bored when reading these books, there's always another angle at play coming just around the corner.

The other thing I loved about this book in particular is that the characters finally begin to realize the depths of what they are dealing with and the story gets advanced at a breakneck pace that makes for some truly heart stopping moments.  Where book one was a creepy, slow build foreboding tome, A RITUAL OF FLESH opens the floodgates of blood and gore to a glorious degree for anyone who craves some ghoulish moments this Halloween season.  You really can't get much more brutal toward the end stages of this book and there are some definite moments that will chill the squeamish to an unholy degree to say the least.

The setting of Arn and the surrounding territories is another aspect that makes this story so amazing.  In my mind I picture it as similar to the classic Hammer Horror films of the 60's and 70's starring Peter Cushing.  All that technicolor goodness with the steaming bogs, fog-filled graveyards, and cobblestone village roads.  Yep that's what I envision when I read Conley's books and it's freaking brilliant!  Conley spares nothing at all in his world building and it makes for a fantastic journey that plays out in a mysteriously creepy landscape.

There's really not a lot more that I can say about what Lee Conley has given us with the first two books in this series.  I recommend it for fans who are waiting for the next John Gwynne offering because it has a lot of the feels that I get from his books.  It certainly is epic in nature the same way that The Faithful and the Fallen books are and there's an undeniable sense of tension and awe as well.  The Dead Sagas is a series worth discovering for all of the reasons I mentioned and so much more.  It really is a landmark effort that begs to be read and savored.  A RITUAL OF FLESH only solidifies its standing among the very best in horror fantasy fiction with a story that is shocking, suspenseful, and more than satisfying.  Read it at your own peril....or pleasure.